Dido and Aeneas in München

"We know that Bach did not use women’s voices in any of his sacred compositions: his choir at St Thomas’s Leipzig used boys’ voices on soprano and alto lines for both choruses and solos. So as much as using ‘baroque’ violins or ‘natural’ trumpets, any performance that tries to follow historical precedents must use boys’ voices in both the soprano and alto lines of the choir and in the upper-voice solos if it is to have much validity. It is true that voices broke later in the eighteenth century than they do in the twentieth (due largely to our greatly improved medical and sanitary conditions which give young bodies fewer diseases to fight, and thus allow them to grow and mature sooner), but it is fair to presume that those eighteenth-century voices also ‘strengthened’ later as well: comparison of the relative sizes of eighteenth-century children with their twentieth-century counterparts shows them to be consistently smaller and less developed physically. Bach’s best boys were probably fourteen to sixteen years old: similar twentieth-century ones tend to be twelve to fourteen. It is not unreasonable to imagine that the sound produced by both groups is fairly similar. Musicianship is not automatically ‘better’ in an older child than a younger one, for one is often astonished by the innate musicianship of a younger child over that of an older one, and (as any experienced cathedral organist will tell you) a choir and its voices can change radically over the course of just a few months – it is hard to imagine Bach having any easier a task with the cultivation of his choristers than does a twentiethcentury cathedral organist!

A much more important consideration is to use voices which produce a ‘continental’, strongly chestvoiced style of delivery, far removed from the ‘white’ head voice that is sometimes produced by English choristers, and to use not only boy sopranos but also the unique sound of boy altos. The argument that Bach’s boys possessed an enhanced musical maturity through their greater years has been advanced as a reason for not using boys’ voices at all: the substitution of women’s voices seems to be a radical one, creating a sound which Bach could not have expected to hear.
Whilst it is far harder work performing Bach’s Mass using children on choruses and solos than it is calling on experienced and technically more assured female adults, the sound of unbroken soprano voices and the astonishing timbre of boy altos is inimitable and, in the end, seems so utterly right for Bach’s music. It is this choral sound which he heard almost every day of his working life. So, whilst we would be foolish to suggest that with this recording we have got any nearer to Bach’s actual performing intentions than has anyone else, we have tried to lay in every possible store to do so." 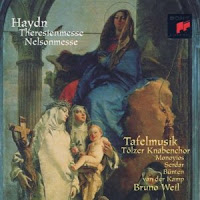